The Best in Comedy return to The Maltings, Ely riverside! 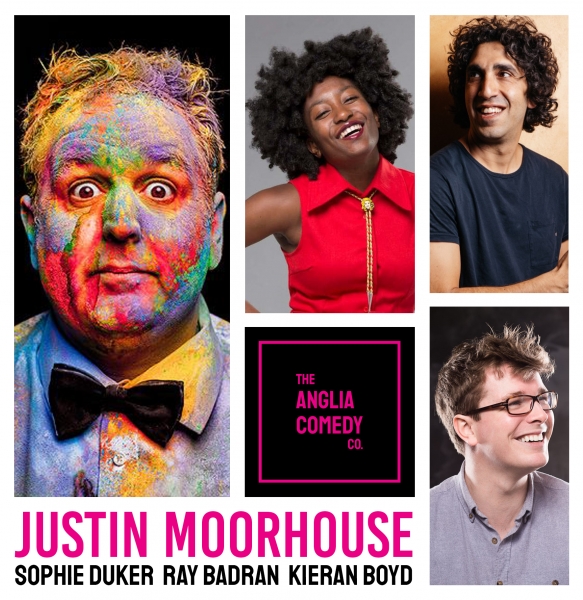 The Best in Comedy return to The Maltings, Ely riverside!

#Justin_Moorhouse. Comedian. Actor. Dog Walker. Parent. Sometimes on your telly, never on your drive. Has own teeth and is left-handed. Veggie.

Over a million podcast downloads. Winner of The Chortle Award for Stand Up Comedy. Celebrity Mastermind Champion.

As seen on Live At The Apollo, 8 Out of 10 Cats, Coronation Street, Alan Davies: As Yet Untitled Shameless, and Peter Kay’s Phoenix Nights.  Series regular on The Premier League Show, The News Quiz and 5Live's Fighting Talk.

He has performed stand-up comedy on television a number of times including, several series of The Comedy Store (Comedy Central), One Night Stand (Dave) and was Michael McIntyre’s guest on his Blackpool leg of Comedy Roadshow (BBC1).

#Sophie_Duker is your Venus, she’s your fire, your desire. Or is she? Silly, sexy, savage stand-up from a girl who’s definitely not a goddess.

Sophie co-hosts Grown Up Land on BBC Radio 4, is a regular on BBC’s Mock The Week and has appeared on Frankie Boyle’s New World Order, Comedy Central's Roast Battle, and 8 Out of 10 Cats Does Countdown.

#Ray_Badran is an acclaimed Australian comedian and winner of Best International Comedian at the New Zealand Comedy Guild; who is renowned for his quirky and sharp observations.

Ray can be seen on the 6 part Comedy Central series No Experience Necessary which he wrote and starred in. Ray is ready to tackle the big issues in life such as pockets, Subway sandwiches and fridges with his characteristic whimsy and off-beat observations.

“It all adds up to a beautiful, hilarious shambles” - New Zealand Herald

“Getting the entire crowd in hysterics” - Arts Review Australia

★★★★★ “This is uncomplicated comedy in its purest form” - Broadway World

#Kieran_Boyd has been performing his inventive, high-energy stand up across the country for years & 2020 has seen him support Ed Byrne and Ed Gamble on tour.

With acclaimed sketch trio WitTank, Kieran has enjoyed nine years of sold-out audiences at the Edinburgh Fringe as well appearences on Three at the Fringe (BBC3) and BBC Radio Scotland. WitTank can be seen as stars of 3 series of the acclaimed comedy show, Live At the Electric (BBC3) and E4.

This show is not to be missed!

Line up subject to change

Strictly over 18s only.

We appreciate it is currently a strange time for us all right now, with no clear end in sight. We just wanted to ensure our customers, that we are still working as normal and that we are here at the drop of an email.

We have currently closed our venue for the time-being to ensure the safety of our staff, customers, suppliers and friends but we are looking forward to re-opening as soon as we can, with a variety of new events and some postponed events. Keep an eye on our website and our Facebook page to keep up-to-date with all our events, details and news!

You can also find out more about the Ely Community Covid-19 Aid Group here.

In the meantime I wish you all the best and hope you all stay safe and well in these times of uncertainity.

Look forward to seeing you in our venue soon.

Lola and all at The Maltings