The Best in Comedy

The Best in Comedy 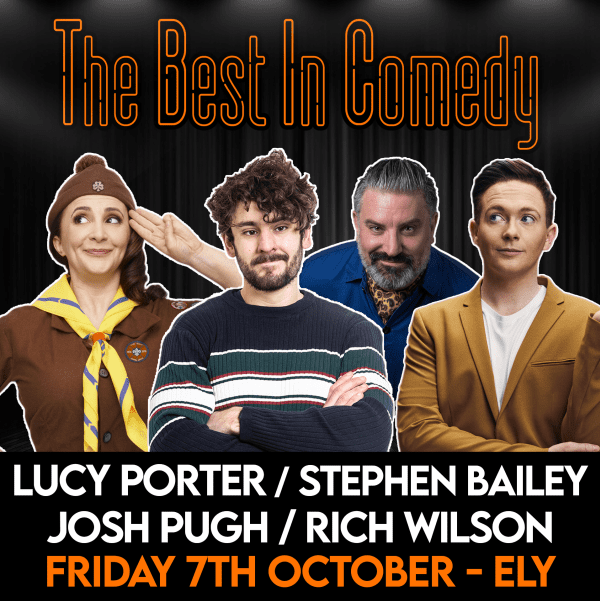 The Best in Comedy show returns to The Maltings this October with a superb line-up featuring the hilarious Lucy Porter, Stephen Bailey, Josh Pugh & Rich Wilson! Lucy Porter is a well-known face on TV from such shows as Live At The Apollo, Would I Lie To You, Have I Got News For You and QI. A veteran of the UK comedy circuit, she has performed 13 one woman shows at the Edinburgh Festival and taken her comedy all over the world from Las Vegas to Cape Town ★★★★★ “Brilliantly crafted jokes” – Metro★★★★★ “Hilarious” – Edinburgh Evening NewsComedian, presenter, actor and writer, Stephen Bailey is a proud northern, working class, gay man. The multi-award nominated star’s indecorous brand of gossipy humour has singled him out as one of the UK’s most sought-after comedy talents. Stephen’s credits include co-host on BBC One’s Date or Drop alongside Amanda Holden, Live at the Apollo, The Stand Up Sketch Show, Roast Battle, Celebrity Mastermind and The Apprentice: You’re Fired to name a few… "A superstar in the making" - British Comedy Guide.Josh Pugh is the winner of English Comedian of the Year and the Birmingham Breaking Talent Award. This year he appeared on Dave’s Hypotheical with James Acaster & Josh Widdicombe. Josh performs stand up across the country and has toured in the UK and Australia. “'An almost certain future star... this is a classy hour of charming left field comedy” – ChortleRich Wilson's “tour de force” (Leicester Mercury) performances have earned him a win for Best International Guest at the New Zealand Comedy Awards, followed by a sell-out run in which saw him nominated for the same award again. ★★★★ “Incredibly personal… a real touch of class” – Ed Fest Mag This show is not to be missed! Strictly over 18s only.Please Note Line up subject to change
For Tickets please click Here
Loading Map

Welcome to The Maltings

As things are moving forward, we would love to invite you back into our Venue.

We have many events planned throughout this year and next year and we would love to see you there. We are keeping the NHS track and trace QR code, this is not mandatory but we do recommend using the app, hand sanitizing stations will be located throughout the Venue and the Venue will be sanitized before and after each event to ensure the safety of customers and staff.

We hope to see you at one or many of the upcoming events or just for a coffee.

Lola and All staff at The Maltings